Did you know that the inventor of Braille was a 15 year old child? Read on and we’ll fill you in on the amazing tale of Louis Braille. 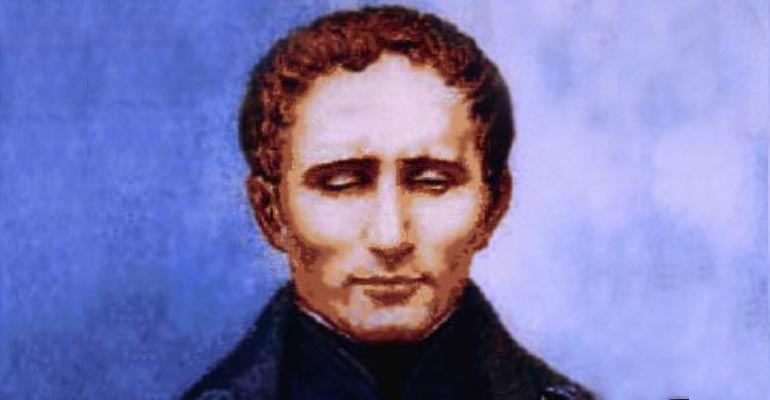 Did you know that the inventor of braille was a 15 year old boy? Not many people know much about how braille was created, or Louis Braille’s story.

Read on and we’ll fill you in on this amazing story. 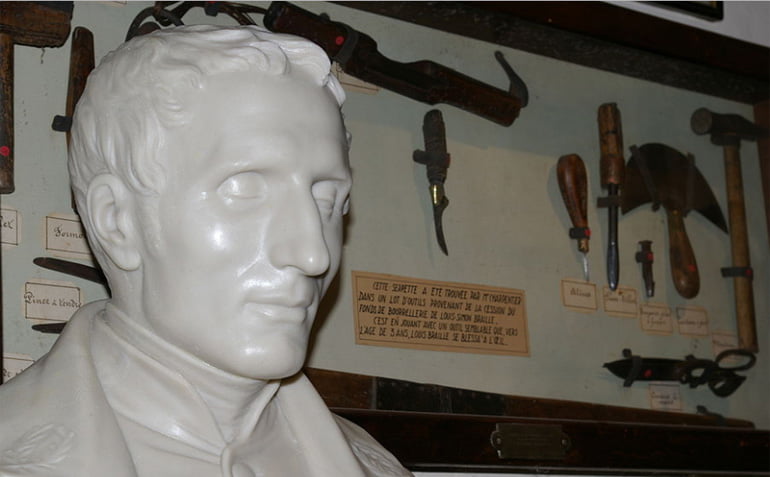 Louis Braille bust with leathering equipment[3]: Exhibit of leathering tools including an awl.

On 4 January 1809, Louis Braille was born to a middle-class family in a small town near Paris.

His father was a leatherer, and Louis spent his days playing in the workshop, copying his Dad.

One day when he was three, Louis was squinting closely at a piece of leather he was trying to pierce with a sharp tool. Pressing hard into this leather, the tool slipped and went straight into one of his eyes.

Now, this is only the nineteenth century and medicine (as we know it) wasn’t invented yet, so Louis was rushed to the local healer who bandaged it up. But an infection set in, which soon spread to his other eye and by the age of five, he was blind.

#2. A noblewoman paid for Louis’ education 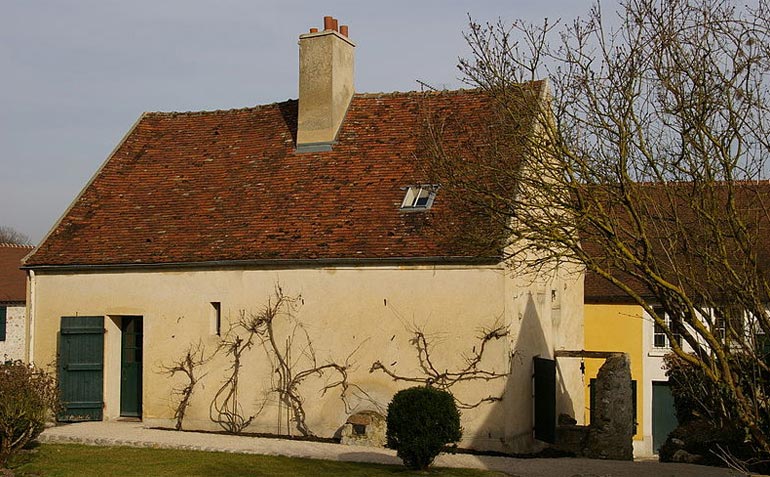 In the 1800s, sadly if you were blind you were seen as helpless, and many people would actually end up begging to make ends meet.

Often, only those people who were born into very wealthy families were able to afford an education. While Louis’ Dad had a successful leather business, with three other children to feed, they were far from rich.

However, when Louis was nine, a noblewoman heard of his story and was so moved she pleaded with the Royal Institute for the Blind school in Paris, the world’s first school for blind and visually impaired, to take him as a student.

Soon after, Louis travelled to Paris to start his first day at school. 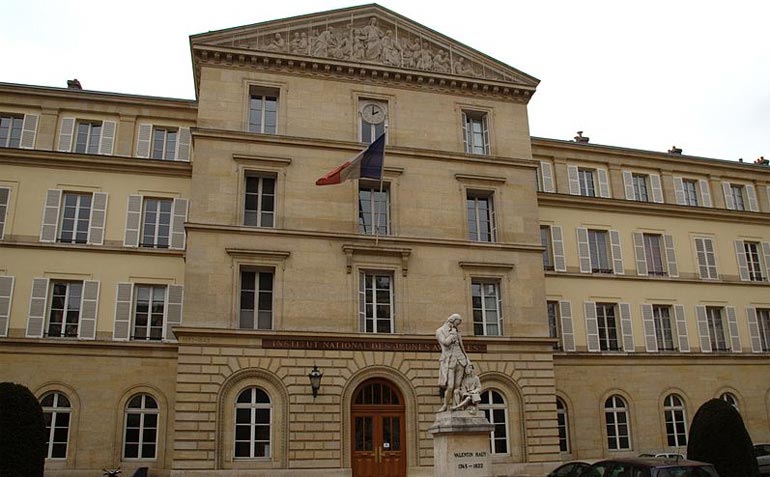 While the Royal Institute for the Blind may have been a world first, the building was in fact a damp, dark, dilapidated old jail.

Students weren’t given much food, they could only shower once a month, and there were lots of rules and harsh punishments.

#4: Louis learnt to read and write by tracing giant letters

School wasn’t all bad for Louie – he was able to learn lots of new subjects (like grammar, music and science), and also was able to get hold of what he had wanted for so long – books.

He even learned to read by using his fingers to trace raised letters in specially made books.

The books were a bit of a letdown, though – the text was very big and each sentence took up a whole page, which meant some seriously short stories.

It also wasn’t enough for Louis to read, he also wanted to write!

So, he got his hands on an alphabet made from bits of thick leather. It was a slow and fiddly process, but he began to write by tracing around these leather letters in ink.

While paying a visit to Louis’ school, a retired army captain, Charles Barbier, told the students about a method the soldiers used to use to communicate with each other.

The method involved writing a message in code by punching dots and dashes into heavy paper with a sharp tool. It could be done in silence and without light so they wouldn’t give themselves away to the enemy.

While the method had never taken off in the army (soldiers found it too complicated), it gave Louis the inspiration he needed.

Seeing a code like this as his ticket to finally being able to read and write, Louis set to work creating a better system.

#6. Louis invented the braille language system when he was only 15 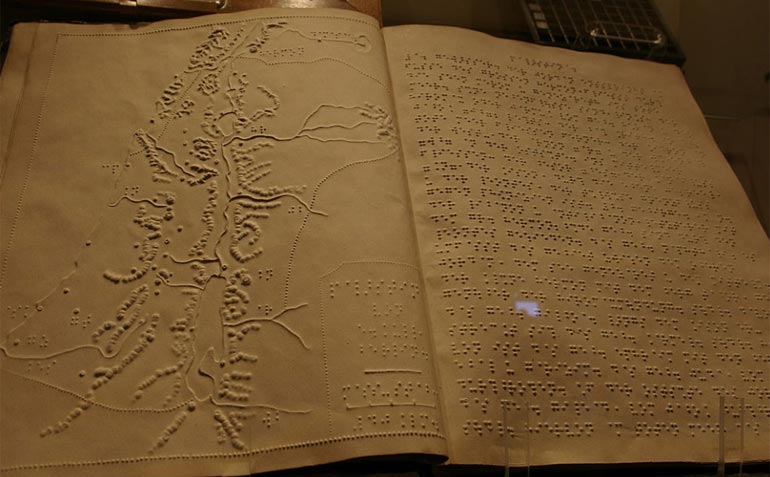 Over a two year period, Louis worked hard on his new system, after many late nights, and at the age of just 15, he finally cracked the code!

To put his new system to the test, he asked the School’s Headmaster to read out an article from a newspaper. As the words were read out, Louis recorded each word using his Braille system and then repeated it, word-for-word back to the headmaster – proving he’d been successful in creating a new reading and writing system for the blind.

#7. Louis died before he could see the impact of his invention 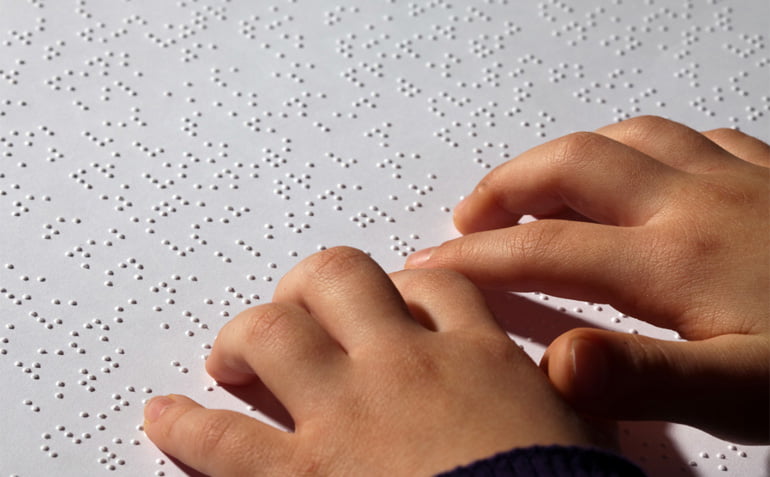 By the time Louis was 19 years old, he was teaching full time at the Royal Institute for the Blind.

While the school’s director admired and respected Louis, he was worried that the braille system would allow blind students to become ‘too independent’, and no longer need their teachers. So for many years the language system still wasn’t introduced.

Sadly, Louis died at just forty-three, after a long battle with a respiratory condition (believed to be tuberculosis). Just two years later in 1854, his language system was finally adopted by the Royal Institute for the Blind, thanks to overwhelming demand from students.

From there, braille spread through the rest of the word – and in 1878, the World Congress for the Blind voted to make it the international system for the blind. Now, Braille has now been taken up by almost every language worldwide.