Beethoven amazingly composed a huge amount of his music once he was deaf. Find out more about this remarkable man.

Beethoven might be considered one of the greatest composers of all time, but it’s surprising how little many people actually know about him.

This musical master managed to achieve some remarkable things in his life – including composing his most complex and highly regarded symphony, while deaf. Find out more about this remarkable man.

#1. Beethoven’s father pushed him to become a child prodigy 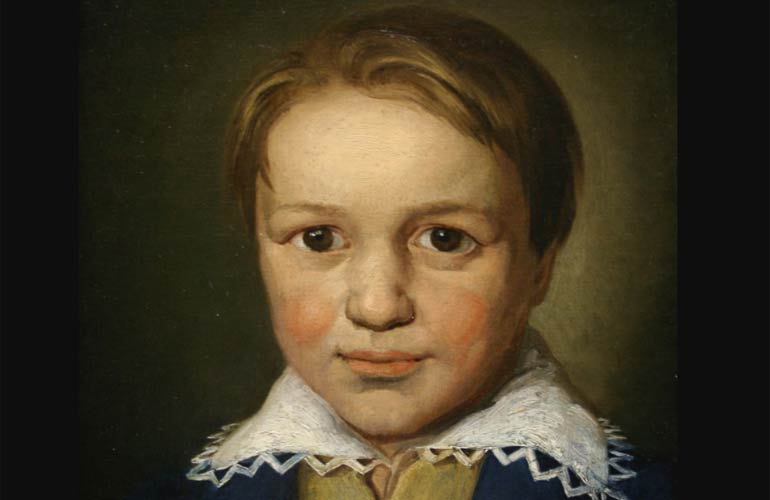 Beethoven’s Dad (a music teacher), planned all along for Beethoven to be a child prodigy. Born in Germany in 1770, Beethoven was thrown into the world of music from a very young age and made his public performance debut at just 7 (although his Dad told everyone he was 6 to create extra hype).

Sadly, it wasn’t just encouragement Beethoven got from his Dad – he also regularly received emotional and physical abuse and was forced to practice for days on end.

Legend goes that as a small child, Beethoven was forced to stand on a stool, so he could reach the piano keys and was whipped for any mistakes.

#2. We don’t know what caused Beethoven to lose his hearing 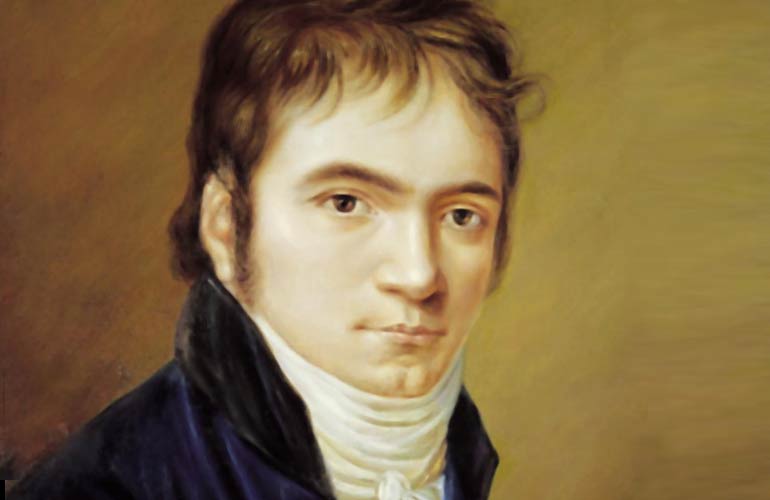 There are lots of theories flying around about what caused Beethoven to lose his hearing, including syphilis, lead poisoning, and lupus. Some even blamed his habit of dunking his head in cold water when he was tired!

But the truth is, no one can confirm the cause – what we do know is at 26, he started hearing a ringing and a buzzing in his ears, and things worsened from there.

Beethoven’s biggest fear was that his lack of hearing would affect his career, so even though he had nearly completely lost his hearing by the time he was 44, he desperately tried to hide this from everyone, even his closest friends.

This caused a big impact on his social life, with Beethoven writing “for two years I have avoided almost all social gatherings because it is impossible for me to say to people ‘I am deaf’. “If I belonged to any other profession it would be easier, but in my profession, it is a frightful state.”

Even though his hearing was steadily deteriorating, he still managed to compose an opera, six symphonies, four solo concerti, five string quartets, six string sonatas, seven piano sonatas, five sets of piano variations, four overtures, four trios, two sextets, and 72 songs! This flurry of activity still ranks as one of the most productive periods in the life of any musician!

Because Beethoven had been immersed in music from such a young age (and because he was a pretty exceptional man) – even after he lost his hearing, he could still ‘hear’ the music in his head.

His housekeepers also told of how he would sit at his piano with a pencil in his mouth touching the instrument, so he could feel the vibration of the notes while he worked away.

#4. His hearing loss did impact his music 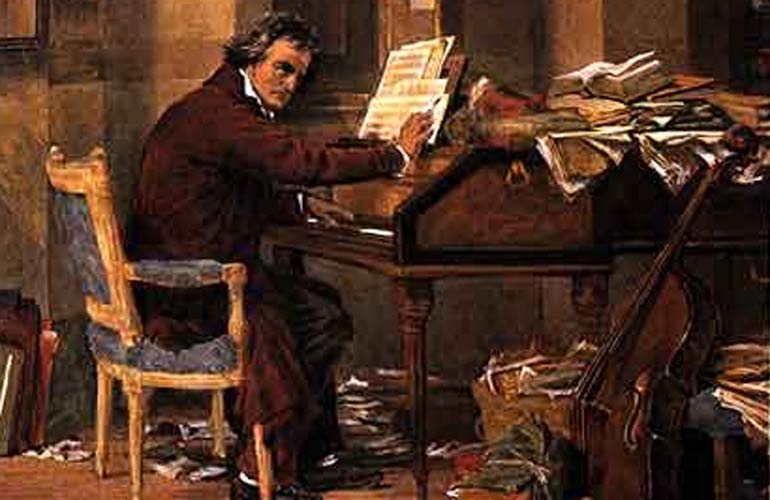 In his earlier works when he could hear the full range of frequencies, he often used lots of high notes. But as his hearing began to worsen, he could no longer hear these high notes so instead he chose to use lower notes in his compositions which were easier for him to hear.

But towards the end of his life, the high notes actually returned – this is when he started to let his compositions take shape in his imagination and listen with his ‘inner ear’.

#5. Although he couldn’t hear, he insisted on conducting his famous Ninth Symphony 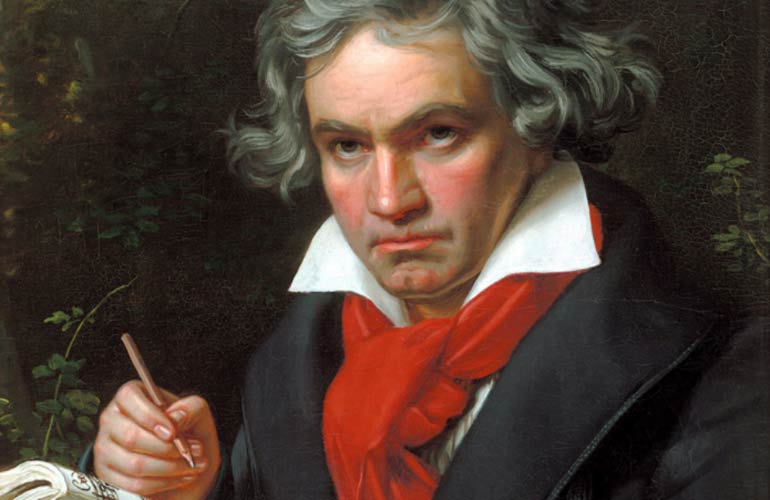 Beethoven’s Ninth Symphony (also one of his most complex pieces) was written when he was almost entirely deaf – but even so, he actually insisted on conducting the first performance of this masterpiece. But, the orchestra actually arranged another conductor, Michael Umlauf to stand beside him and it’s believed Umlauf told the orchestra to ‘ignore Beethoven’ and follow him instead.

But Beethoven’s enthusiasm was clear to everyone there, with one of the musicians reporting, “he stood in front of the conductor’s stand and threw himself back and forth like a madman. At one moment he stretched to his full height, at the next he crouched down to the floor. He flailed about with his hands and feet as though he wanted to play all the instruments and sing all the chorus parts.”

#6: He couldn’t hear the huge applause at the end of the Ninth Symphony 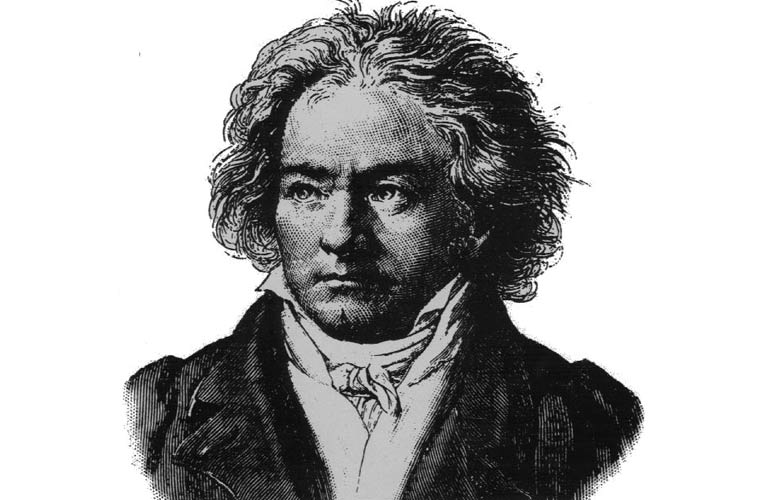 When the first performance of his Ninth Symphony ended, Beethoven couldn’t hear the thunderous applause, and remained with his back to the crowd. Although the crowd were determined to make him realise how much they loved his symphony with five standing ovations.

Legend has it that a young female singer approached the maestro and turned him around to face the audience, to see the ovation.

#7. There are some wild theories about Beethoven’s final words 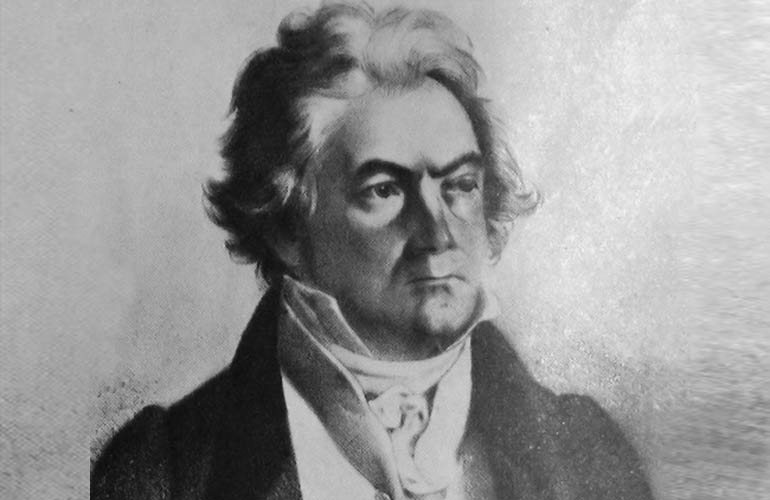 Beethoven died at the age of 56 during a thunderstorm that his friend likened to one of the composer’s great symphonies, saying “crashes that sound like hammering on the portals of Fate”.

Looking back on his life, Beethoven was plagued with poor health including chronic hepatitis, jaundice, colitis, various skin diseases, rheumatic fever and cirrhosis of the liver – but his actual cause of his death is still unknown.

Like the cause of his death, Beethoven’s final words are also a mystery.

Some report that after receiving a case of wine as a gift, he said “Pity, pity, too late”. Others speculate these words were “Plaudite, amici, comedia finita est” meaning, “applaud, my friends, the comedy is over” and some say his final statement was “I shall hear in heaven”.