When Greta Thunberg was 15, she skipped school, sat down outside Swedish parliament and kicked off a global movement. 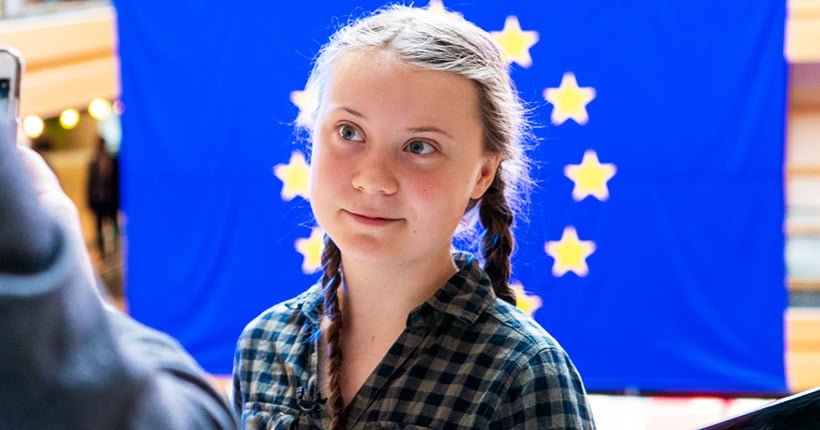 Greta Thunberg is not your average 16yr old girl. From Sweden, this strong and passionate activist has become world-famous in little more than a year for taking action on the world’s climate crisis.

Learn more about this young woman.

Greta was so worried about climate change she became depressed

At the age of eight, Greta first learned about climate change but was shocked that really nobody, even adults, seemed to be taking the issue seriously.

Greta began to worry about the uncertainty in her future with temperatures increasing (by as much as 3.4 C by the end of the century), sea levels rising, glaciers melting, bush fires, cyclones, droughts and floods increasing, and animals dying.

Partly due to this stress and worry, three years later, she became depressed and lethargic, stopped talking, stopped going to school, and even stopped eating.

On Twitter she described how before she started her climate campaign, “[I had] no energy, no friends and I didn’t speak to anyone. I just sat alone at home, with an eating disorder”.

“I kept thinking about it and I just wondered if I am going to have a future.”

As Greta started talking to her parents about her fears and showing them pictures, videos, and reports, she realised she could make a difference. And so, her drive to start her campaign began….

Greta started the climate strike movement, all on her own 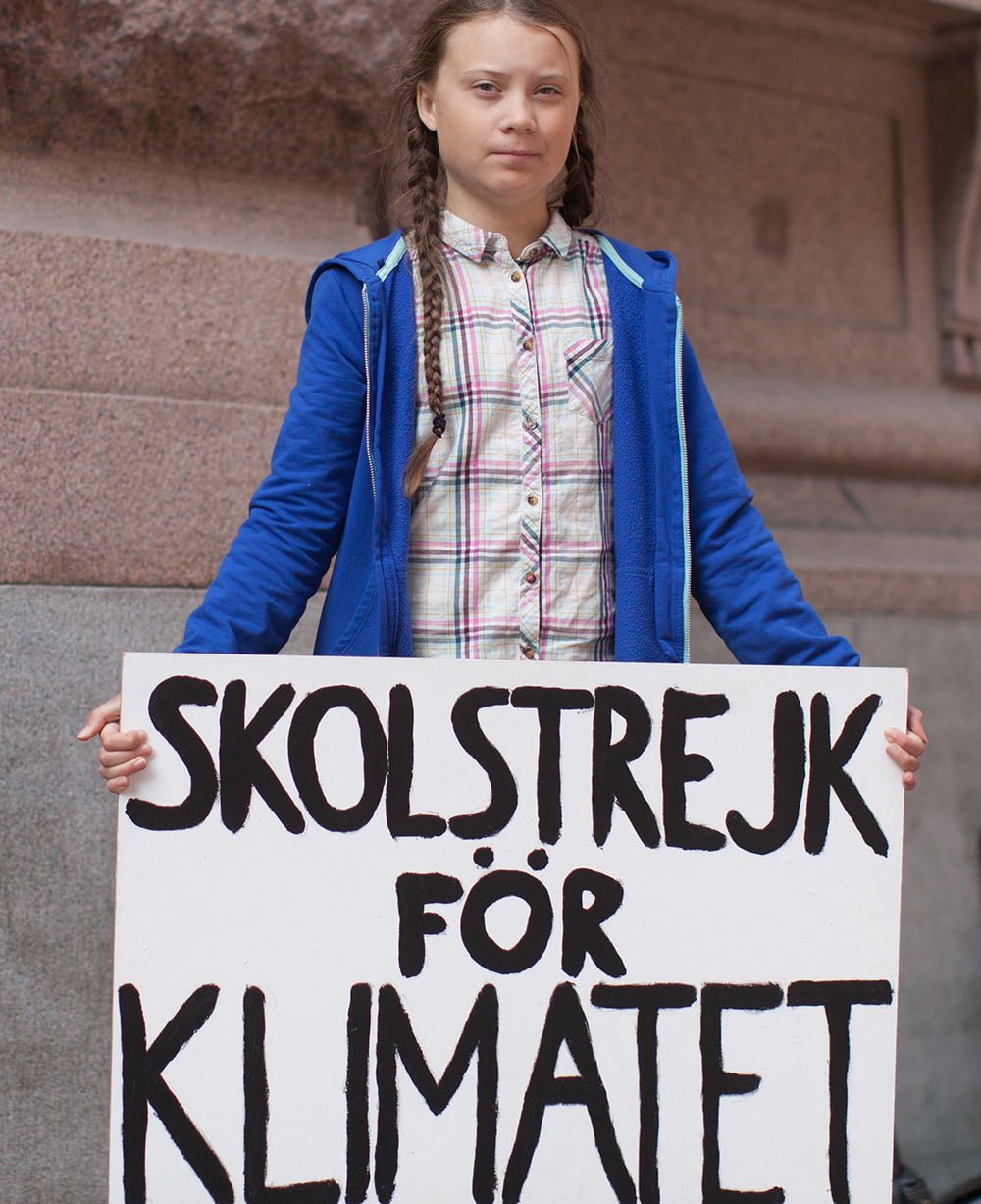 On the 20th August 2018 when Greta was 15, she skipped school, sat down outside Swedish parliament, and kicked off a global movement.

Greta was demanding action for climate change – specifically for the Swedish government to reduce carbon emissions in accordance with the Paris Agreement.

So, every day for three weeks in the leadup to their election, she sat holding a sign ‘Skolstrejk för klimatet’ (school strike for the climate) and handed out flyers with a blunt message: “I am doing this because you adults are shitting on my future.”

Soon, a few other students started joining her, then dozens, then hundreds. By spring time in Sweden, Greta had inspired a worldwide movement of millions: #ClimateStrike.

In September this year, strikes are taking place all over the world – in 4,500 locations across 150 countries.

The recent September 20 protest was actually the largest climate strike in world history. Over 4 million people got involved including 300,000 protesters from Australia. 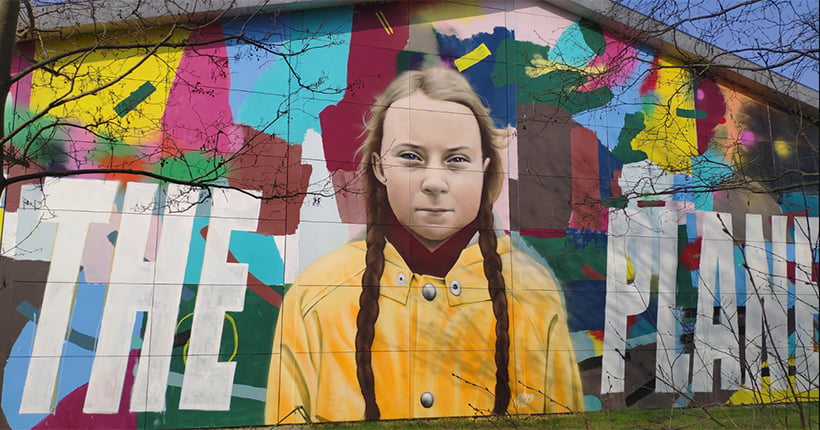 Since that day in August, Greta has inspired countless kids and adults from all over the world in what is being called the “Greta Thunberg effect”.

The “Greta Thunberg effect” has been said to be the reason for double the number of kids books published, and sold, about the climate crisis.

Money is starting to pour in around the world to support the school strike groups and other environmental organisations.

In June 2019, Swedish Railways (Greta’s home country) reported that the number of Swedes catching the train for domestic journeys had risen by 8% over the year – something Greta advocates strongly for.

What’s quite clear after Greta’s speech at a United Nations Summit, is her influence is only growing stronger.

She delivered an emotional speech telling world leaders, “You have come to us young people for hope. How dare you. You have stolen my dreams and my childhood with your empty words, and yet I’m one of the lucky ones. People are suffering. People are dying. Entire ecosystems are collapsing.”

Greta made front page news and was shared on social media for her gutsy and passionate speech – and also for delivering President Trump an epic death stare as he arrived at the Summit. What’s very clear is… people are standing up and listening.

Greta’s autism is her superpower

From her first moments in the spotlight, Greta has been open about her autism (she uses the term Asperger’s syndrome), obsessive–compulsive disorder (OCD), and selective mutism.

Greta has spoken about her diagnosis saying it makes her “different” but that she considers it a “superpower”.

In one of her first speeches demanding climate action, Greta told how her selective mutism means she only speaks when necessary and said, “now is one of those moments”.

She explains that when most people think about climate change they might feel sad or worried for a moment, but then they usually move on and go about their day.

Greta explains she can’t do that.

“I overthink. Some people can just let things go, but I can’t, especially if there’s something that worries me or makes me sad,” she said.

“I remember when I was younger, and in school, our teachers showed us films of plastic in the ocean, starving polar bears and so on. I cried through all the movies. My classmates were concerned when they watched the film, but when it stopped, they started thinking about other things. I couldn’t do that. Those pictures were stuck in my head.”

With her sudden fame, Greta has been the target for online abuse — which is only a sign that climate deniers are scared of her.

Sadly though, she has been mocked for everything from her views to her appearance.

A British MP dismissed her as the “Justin Bieber of ecology.”

Even President Trump mocked her this week after her furious and tear-filled speech to the UN. Trump tweeted the clearly-mocking caption: “She seems like a very happy young girl looking forward to a bright and wonderful future. So nice to see!”

Instead of being phased by Trump, she trolled him by updating her Twitter bio to: “A very happy young girl looking forward to a bright and wonderful future.”

But sadly these comments are just a taste of the online bullying.

Despite being bullied at school, she doesn’t let it faze her, “I expected when I started that if this is going to become big, then there will be a lot of hate,” she says.

“When haters go after your looks and differences, it means they have nowhere left to go. And then you know you’re winning!” she wrote on Twitter, using the hashtag #aspiepower.

We know from the backlash against Leonardo DiCaprio and even the Duke and Duchess of Sussex, that if you advocate for climate change you need to walk the talk.

And Greta absolutely does. Greta and her parents are vegan and they also refuse to travel by air.

Cutting out air travel even meant that Greta’s mother had to give up her career as an international opera singer!

Where she can, Greta will travel by train, but recently when it came to a trip to the US, she had to look at other options.

In August 2019, she actually sailed in a 60 ft racing yacht with solar panels across the Atlantic Ocean from the UK to New York.

The trip taking 15 days was carbon neutral and was the perfect entrance for attending the UN Climate Action Summit.