Here are 5 amazing people with savant syndrome, who all have abilities which are far in excess of the general population.

When many people think of the word ‘savant’, they think of the fictional character Raymond Babbitt from the movie ‘Rain Man’. But what exactly is savant syndrome? And does the movie have any truth to it?

There was quite a spin put on the story of ‘Rain Man’ by Hollywood, however, savant syndrome is very real. While it’s rare, some people with a disability do have exceptional abilities, far in excess of the general population.

We don’t actually know what causes savant syndrome. There are many theories, but no one theory is able to cover all people.

They estimate that 10% of people with autism have some level of savant abilities, but people with developmental disabilities, acquired brain injuries, or injuries to the central nervous system also can.

While some people start demonstrating their abilities in early childhood, such as those with autism, others suddenly acquire them later in life due to an accident or illness such as a stroke.

The abilities of people with savant syndrome are very varied.

Some people can multiply and divide large numbers in their head. Others can answer the question, ‘What day of the week was March 22nd 1932?’, with ‘Tuesday’ instantaneously.

Some can play up to 22 instruments, measure distance without using any instruments, learn languages in a few days, or memorise huge volumes of information.

Here are just 5 people with savant syndrome who have amazing abilities.

While Raymond from ‘Rain Man’ was fictional, the character was actually inspired by the true story of Kim Peek.

In the movie, Raymond is portrayed as having autism, however, Kim actually had a condition where the bundle of nerves that connect the two hemispheres of the brain was missing.

Kim memory abilities were astounding. During his life, he memorised over 12,000 books including the Bible, and was an expert on 15 subject areas including geography, music, literature, history, and sports.

Amazingly, Kim could actually read two pages at once, his left eye read the left page, and his right eye read the right page. It only took him 8 seconds to read and memorise the two pages.

Find out more about Kim Peek in our blog.

When Leslie was born prematurely, he had brain damage, cerebral palsy, and had to have his eyes surgically removed due to glaucoma. When Leslie was put up for adoption at 6 months old, May, a local nurse who was 52 with 5 children of her own, welcomed him into her family.

When Leslie was 16, in the middle of the night May woke to music playing. Thinking she had left the TV on, she went into the lounge room to turn it off, but found Leslie playing Tchaikovsky’s Piano Concerto No. 1 flawlessly on their piano – he had heard it on TV earlier that day.

Despite Leslie having no musical training, he began to play all styles of music from ragtime to classical. All it took for Leslie to play a song perfectly, was for him to hear the music once (watch Leslie on YouTube).

For many years before Leslie’s health declined, he gave regular concerts in the US, Japan and Scandinavia, and also appeared on many US TV shows. 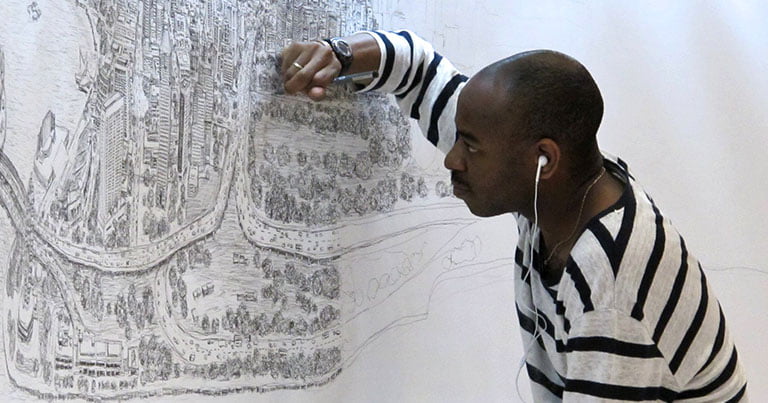 As a young child, Stephen discovered a passion for drawing – first of animals, then buses, then buildings and the city’s landmarks. Throughout his early childhood, Stephen was unable to communicate verbally, but instead communicated through his drawings.

Today, Stephen is an artist with a unique talent which has led to him being nicknamed the “human camera”. After he sees a city landscape just once (such as from a plane), he can draw it perfectly from memory – right down to the number of floors and windows on each building.

Famously in 2005 following a short helicopter ride over Tokyo, he drew a perfect 10m landscape of the city, and has since also done Rome (watch him at work on YouTube), New York, and Singapore.

Men with savant syndrome actually outnumber women by 6:1, however Ellen is an amazing woman with savant abilities.

Ellen is visually impaired, but to navigate around she makes chirping noises that bounce off objects in her path so she can detect the reflected sound, like her own form of personal sonar.

Ellen also has amazing timekeeping skills. When she was 8, Ellen used to listen to the ‘time lady’ – before the internet people could ring the ‘time lady’ to hear a speaking clock, right down to the second. From then on, Ellen has instinctively known the exact hour, minute, and second of a day at all times.

Similar to Leslie, Ellen also has exceptional musical talents and can play music perfectly after hearing it just once. Famously, a reporter once tried to catch her out by asking her to play obscure songs, but Ellen played every one.

Daniel first became famous when he recited Pi from memory to 22,514 decimal places (a feat which took over 5 hours), and since his exceptional mathematical and language abilities have amazed the world (watch this amazing feat on YouTube).

Daniel speaks 11 languages, and in 2007 was challenged to learn Icelandic (a notoriously difficult language) within the week. Seven days later, Daniel was interviewed on Icelandic television, speaking of course in fluent Icelandic!

His real talent, however, is numbers. Numbers, according to Daniel, are special to him. He actually ‘sees’ numbers and calculations – a rare ability called synaesthesia. In his mind each number from 1 to 10,000 has its own unique shape, colour, texture and feel. He has described 289 as being particularly ugly, 333 as particularly attractive, and Pi as beautiful.

Find out more about Daniel Tammet in our blog.