A blood clot meant i’m lucky to be alive

Doctors told Paul that he would never walk or talk again, but he made sure he proved those specialists wrong. 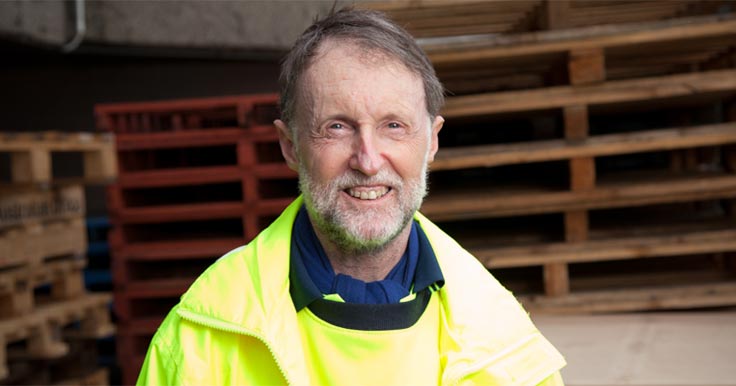 After a blood clot, the doctors told me that I would not walk or talk again because of my disability. But I didn’t give up. I proved all those specialists wrong – Paul.

It was 2:30 in the afternoon on the 13th September 2008 when I collapsed. It was the local election day, so my wife Jenny and I were up at the school to vote. The following weekend we were planning on visiting Jenny’s parents up north, so she then decided to pop to the shops to pick up a few things for our trip.

Instead, I decided to head back home walking slowly because there was a pain above my knee that day. I had thought at the time that the pain was just a strained muscle, or maybe I had knocked into something.

As I left the school and started to walk home, it was on the pedestrian crossing outside of my apartment that I collapsed. I was lucky that it was election day as usually at 2:30 in the afternoon nobody would be around. I was told later that a passerby was able to keep me alive with CPR until the ambulance got there to take me to the hospital.

When Jenny arrived home from the shops she had forgotten her keys, and when there wasn’t an answer at the door, went to our neighbours apartment. Our neighbour didn’t know what had happened but told Jenny an ambulance had come by. At that, Jenny rushed to the hospital where my brother and sisters were already waiting.

On the first night in hospital I had to be resuscitated 7 times and received 2 blood transfusions. The specialists said to my family that their husband and brother would not live the night out.

The pain in my leg had been a blood clot which had travelled up to my heart.

I was in intensive care for 10 days, with tubes left, right and centre – it was neck and neck. In total I spent 5 weeks in hospital.

The doctors told my family that I would never be able to walk or talk again and I would be in a wheelchair for the rest of my life. But that wasn’t good enough for me. I couldn’t relate to the fact that I could no longer walk.

Before I collapsed I was very active. I worked in a busy job at Aruma and was always on my feet. I also swam 3 days a week, swimming up to 1.5km a day. I think that was the thing that saved me, the fact that I had been so active and fit.

I spent the next 5 weeks in rehab at North Ryde learning how to virtually do everything again. A speech pathologist worked with me on my speech, and a physio got me back in the pool again doing laps and walking up and down the stairs.

I finally went home after nearly 3 months on the 5th December. When I got home I was still using a wheelchair while I worked on rebuilding my strength. Then my eldest sister came over and said to me, ‘we need to get rid of this thing, let’s do something about this.’ And I did.

I kept working on my exercises with my physio, going up and down the stairs, and I was able to get rid of my wheelchair after a couple of weeks. I then moved to using a walking frame, and then after a few weeks more, came the walking stick. After about 12 months recovery I was also able to ditch the stick for good.

Even before I had the blood clot my life had seen ups and downs. I had been born 2 months premature, weighing only 3.5 pounds (1.5kgs), and at 5 years of age, I also spent 6 months in hospital with encephalitis (inflammation of the brain). It was because of this illness that I have learning difficulties and I find reading and writing difficult.

It is a combination of my life up to now, my own determination, and the unwavering support of Jenny and my family that got me through my illness.

The support of my family and friends has been more important than anything to me. If I didn’t have their support I wouldn’t be here. When something happens to one of us, the rest of us all pitch in and help to make it a little bit easier.

Jenny was so strong for me. She used to make my meals, make sure I took my medication, and help me to shower and get dressed. We are very important to each other and I would, and have done, the same for her when she has gone through her own hard times. This year will be our 24th wedding anniversary, and 29 years together.

I feel lucky to be alive. I am proud that I can live to tell the story, it’s important to tell people. It’s important for people to also know that people with a disability can live life in their community and make their own decisions. I’ve been living independently for 35 years now.

For others who go through what I did it’s a hard road ahead, but if you’re determined to do something, you can go and do it. Don’t give up. And get the support from family, friends, doctors, nurses – it’s vital. Do what I did and prove all those specialists wrong.

My story living with Prader-Willi syndrome