Ricky has lived in House with No Steps (now Aruma) group accommodation for the past four years. This is the story of his NDIS journey. 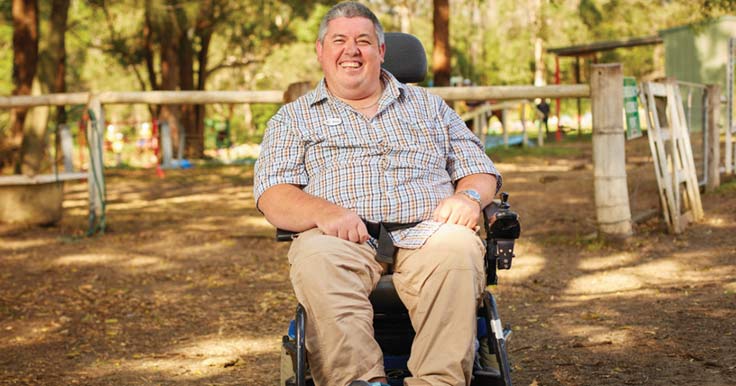 36-year old Ricky has lived in a House with No Steps (now Aruma) group accommodation for the past four years with his brother Darren, “It’s just the two of us,” says Ricky. “We watch sport on TV together, we have a laugh, and we hang out.”

Ricky was one of the first in his area to complete the NDIS interview process. Before his interview, Ricky and his family had heard different stories about what it would mean to them. “Ricky was a bit nervous about the NDIS because he was worried we might not get everything we needed. But the actual process itself worked out really well,” explains his Support Worker, Mick.

After meeting with several different disability service providers, Ricky chose to work with us to provide accommodation, personal care, and day to day support.

Something which was really important to Ricky was being able to choose how he was supported, he explains, “I actually got to interview my staff members. I was looking for people that I could trust.”

Ricky also loves working at Riding for the Disabled Australia (RDA), where he’s the Work Health and Safety Officer. “They’re all wonderful to get along with out there,” he says. “It’s something that I love, and I’m helping people.”

As someone living in a rural area, Ricky especially appreciates the transport we provide through the NDIS. Whether it means being driven to work at RDA, or to his hydrotherapy appointments, being able to choose where and when he wants to go makes a big difference.  “Now with the NDIS, I get more choice and I get to do what I want to do”, he says.