Romance is blooming at House with No Steps’ (now Aruma) Summerland House Farm, in Alstonville, which provides employment opportunities for people with disabilities. 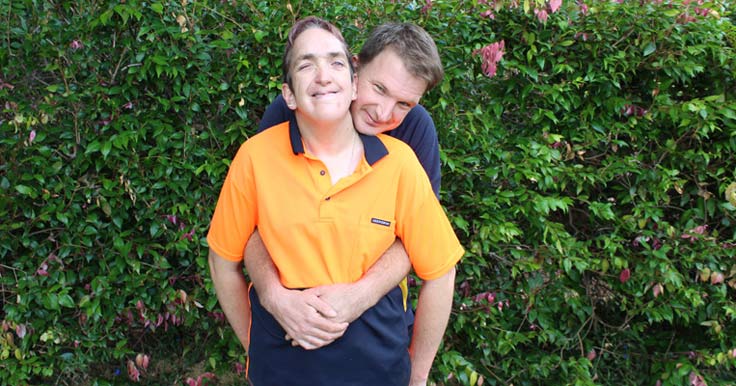 The Barling’s have always had a playful relationship – starting from the moment Jamie first asked Glen out, at a bus stop. To her surprise, he said no. Then just seconds later, Glen asked Jamie out, believing that he should have been the one to ask first.

“He was very cheeky about it, but it made an impression. Glen likes to think it was his ‘swagger’ that I was impressed with. Whatever you call it, it worked.” said Jamie.

Glen and Jamie met working at Summerland House Farm. They both have intellectual disabilities. Jamie also has Sotos syndrome and epilepsy.

The couple have been together for over 14 years, since that day at the bus stop. Their secret to a great relationship is helping each other with the housework and keeping the romance alive. They make sure to kiss each other goodbye before leaving for work, and always make time to call each other during their lunch break.

The two have lots in common and spend most of their spare time together. At home, the Barling’s are usually found walking their Maltese-Shih tzu, Ziggy. The couple have a fun relationship playing playstation, entertaining friends and bowling. They also take time out to relax together, holidaying on cruises.

Valentine’s Day is a particularly special day for Jamie and Glen, as it is also their anniversary. Glen has already planned their date for this year – he will take Jamie to dinner and buy her flowers.

Macadamias are at the centre of Chrissy and David’s lives. At Summerland Farm House, David prunes and maintains Macadamia trees and Chrissy dehusks them. However, it was lunch that brought them together, not the macadamias.

“It was love at first sight! I was waiting for lunch at the Canteen when he unexpectedly asked me out. He was really sweet about it. He is the kindest person in the world.” said Chrissy.

David agrees. When he first saw Chrissy, he thought she was “hot stuff” and would be a great friend to have.

The couple have since been together for five years. In May 2016, they had a Commitment Ceremony at Lennox Head. It was a special day, celebrated among friends and family.

Over the years, Chrissy and David have built their relationship on helping each other. Chrissy supports David’s love for beekeeping by helping him sell the honey. It’s one of the many shared activities that helps keep them close.

What’s their secret to a healthy relationship? Having common interests and doing things together. In their spare time, you can find Chrissy and David walking their dog, or enjoying a meal at their local pub.

And they always celebrate Valentine’s Day. David has a tradition of buying Chrissy chocolate and flowers before taking her out to dinner, usually for Mexican. Regardless of where they go, they always have a lovely time together.