James has been receiving support from House with No Steps (now Aruma) for 18 months, and together with his Support Worker's help, his energy, enthusiasm, and independence has grown. 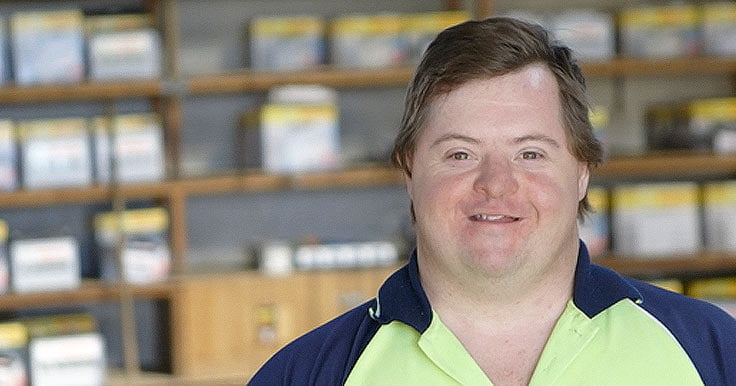 James is a fun loving, outgoing guy who loves to perform.

He lives in his own apartment in Armidale and has been receiving support from us for about 18 months.

Dancing and singing are some of James’ favourite activities. He is a talented actor, and has been part of a drama group for 6 years. James has been the leading man in several of the group’s performances including playing Robin Hood in ‘Rockin Robin’. This year, James also travelled to Norfolk Island to take part in a drama festival where he won an award for his acting talents.

James’ support has been tailored to his individual needs. His Support Worker, Norman, supports him with his shopping, budgeting, trips to his local Lions Club and occasionally to see the football. Together with Norman’s support and James’s energy and enthusiasm, James’ independence has grown. “James plans his own shopping list with very little support needed,” says Norman.

Norman also supports James to go to the gym twice a week where he works with a personal trainer to focus on his fitness and well-being.

James has worked at a local mechanics for 2 years where he helps in the scrap yard and wrecking yard sorting scrap metal and stripping cars.

James’ manager Gary says James is a highly valued member of the team. “He’s good at his job, you give him a project and he will do it until it’s perfectly done. He really brings a great atmosphere with him and he’s always cheerful and singing. He loves to get along with people and make everyone else happy.“

Throughout his time with House with No Steps (now Aruma) James has become a lot more independent. “He’s just grown so much over the last 18 months so I’m sure that will keep happening.” says Gaye, James’ mum, “He never ceases to surprise us with what he’s capable of doing.”