Heather is a shy 24-year old with Spina Bifida. Since coming to House with No Steps (now Aruma), a focus on Active Support has seen her confidence and independence grow. 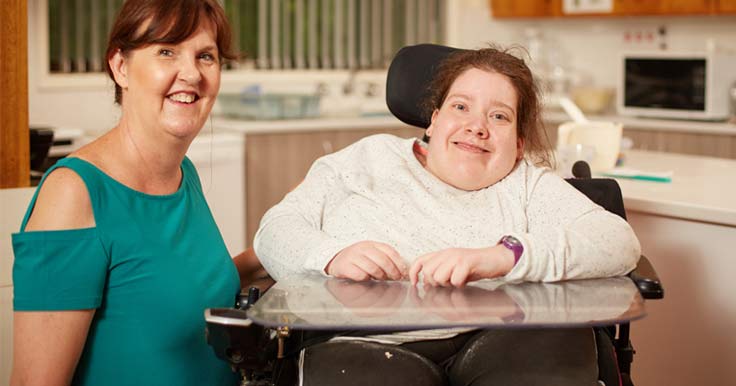 Heather has been one of the people to benefit from Active Support, which is all about empowering people with a disability to do things for themselves, rather than staff doing it on their behalf.

“In the past, Support Workers would actually do things for customers – feeding, getting drinks, getting coffee,” explains staff member, Veronica.

This approach is perfectly aligned with the roll-out of the NDIS. “The NDIS is all about independence for our customers,” says Veronica, “and that’s what Active Support aims to provide.”

Active Support influenced Heather and her family’s decision to choose House with No Steps (now Aruma) as a disability service provider.

“We were looking for somewhere Heather could be more active and do more for herself,” says Heather’s mother, Debbie. “In life that’s what she’s going to need later on when I’m not around.”

One of Heather’s key goals was to make new friends. With this in mind, she is now in charge of a project called ‘All About Me’ – and this is what Heather is most proud of.

For this project, Heather works with other customers, helping them create their own personal booklets where they each record their goals and aspirations. “We wrote down the people’s names, and then we had to write where they lived and put all the pictures into the books. It’s something that I offered to do,” explains Heather.

As Heather’s confidence has grown, she has also been making her own personal goals including developing her computer skills. “We do a lot of computer work, we’re looking at word processing, importing photographs, and putting them into documents” says Veronica.

Having only been with House with No Steps (now Aruma) for a few months, Heather’s mother says she’s seen a dramatic improvement. “She comes home smiling instead of upset,” says Debbie. “She wants to go out now, whereas before she didn’t want to go anywhere.”

Veronica agrees. “She’s actually developing confidence in her capacity to make her own decisions.”

We’re excited to know that the positive impact of Active Support in Heather’s life is just the beginning, and we will be seeing many more similar stories in the making across Australia.