An amazing meeting with Dorothy Watts

House with No Steps (now Aruma) customer Jessica was thrilled after a recent chance encounter with our organisation's co-founder, Dorothy Watts in Newcastle. 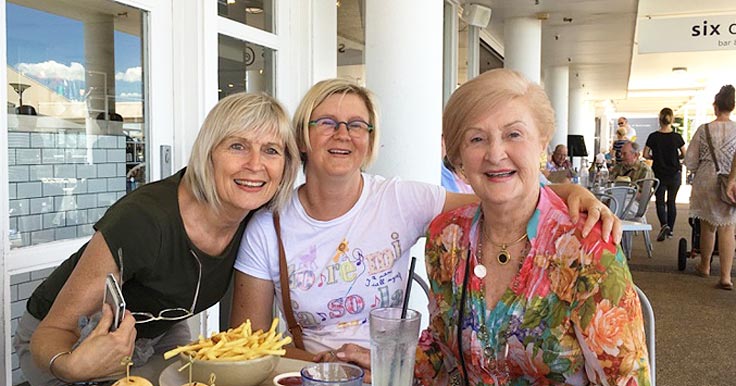 Hi, I’m Jessica and that’s me in the photo with Kalla my support worker and a lady we met. Kalla and I were sitting on the wharf at the Newcastle foreshore eating lunch and watching people wander by.

We went there to see the Queen Elizabeth ship which had come into port that day. I wanted to share in the excitement of such a big event so, as part of my life skills program, I had researched the best place to view the ship and see all the passengers.

I took Kalla’s dog Gabe with us for the outing and, being very cute, he attracted a lot of attention. Two passengers, Dorothy and her daughter Nicole sat down with us. They asked us many questions about Gabe and what we were doing there that day.

Kalla likes me to practise being assertive, so let me do a lot of the talking. Nicole was interested in who I was and wanted to know all about me. During the conversation I told them that Kalla was supporting me, and then Nicole mentioned that her father (who had polio) had been supported by Dorothy for 54 years. She said that in the early days there were no support agencies available and her mother started up a little group. She then asked me whether I had heard of an organisation called House with No Steps (now Aruma), because this was the group that her parents had begun.

As soon as she heard this, Kalla realised that she had seen Dorothy before when Dorothy was the keynote speaker at the organisation’s 2014 Newcastle Awards Night.

I got really excited at this point and said ‘That’s my provider, that’s who I’m with, and that’s why we’re here today’.

Dorothy was as excited as us and said she felt humbled that the small organisation she and her husband had started such a long time ago was now able to help people like me.