Rachel was recently supported by her House with No Steps (now Aruma) support worker Karin to speak up after an incident with a community transport company just didn't seem right or fair. 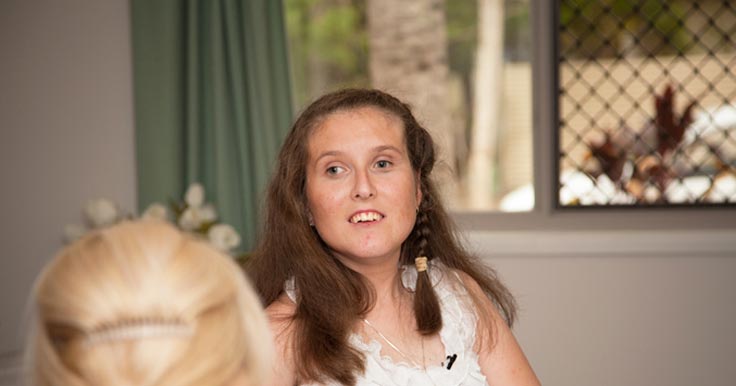 Rachel and her support worker Karin recently spoke up when an incident with a community transport company just didn’t seem right.

My name is Karin and I have supported Rachael for 2 years now. In September 2015 I was asked to support her to an appointment. Rachael uses an electric wheelchair and because our options for public transport were limited on this occasion, the only other option was to use a state funded community transport organisation.

This seemed like a lot so we questioned the difference in price and why Rachael’s companion card did not cover any additional fees for the support staff. The transport company told us that it was because Rachael was being supported by a paid worker. If she was being supported by a family member or volunteer it would be free, however for paid support to accompany her she would have to pay, as the worker is not funded through Home and Community Care (HACC).

This sounded like a clear case of discrimination to us, so we asked for the matter to be re-evaluated by the transport company. Eventually we were told that support staff would now be charged the same rate as Rachael. I discussed this outcome with Rachael but we still weren’t happy and something did not feel right to either of us.

We contacted a local advocacy group to ask if they have had any similar cases. The told us they hadn’t but they would like to take it further and discuss the matter with a Member of Parliament and the transport company.

Despite the advocacy group’s best efforts the transport company would still not budge. So they then advised us that Rachael could now raise a discrimination issue with the Anti-Discrimination Board of NSW if she wished.

A representative from the advocacy group assisted Rachael to submit her application to the Anti-Discrimination Board of NSW which was accepted in December 2015.

We are still waiting to hear the outcome but Rachael is determined not to give up. She has chosen this pathway because she wants to change the charges for everyone in her position.

Well done Rachael for having the courage to speak up and advocate for yourself and others like you!

By Karin Taylor and Rachael Henson.