Paul and Jenny both had tough childhoods, feeling they’d never belong. People like you opened the door to a more rewarding chapter of their lives.

The remarkable story of Paul and Jenny’s love and growth proves how much donations to Aruma (formerly House with No Steps and The Tipping Foundation) can change lives. They’re one of the sweetest married couples you could hope to meet, with a devotion to each other that’s beautiful to see. People like you have been a partner with them too, creating the opportunities they’ve needed over the years to have the life they enjoy together today.

Life for people with a disability can often be difficult and isolating at times. Paul and Jenny both had tough childhoods where they felt they’d never belong. Both have learning difficulties and remember being teased at school. Getting their first job and moving out of home seemed like impossible dreams.

But these were dreams they worked hard to make into a reality with guidance from our Independent Living Services back in the early 1990s. They learned skills that prepared them to take the next exciting step – moving into units on their own, in our supported accommodation. That’s where they met. 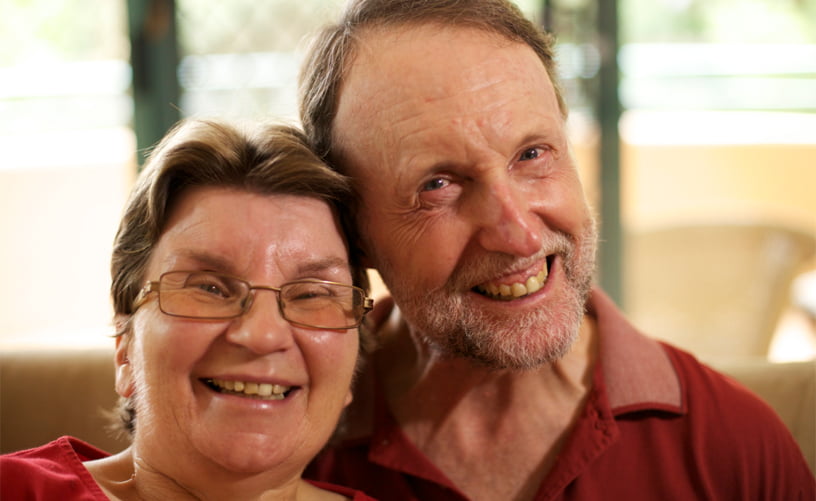 Please help us support people like Paul and Jenny

“When I first saw Jenny, she was like a little doll,” says Paul. “It was the first sight of love I suppose.”

“He made me feel so welcome in the units and we started going out after a while,” remembers Jenny. “We’ve got lots of things in common. We both enjoy swimming, and going out to movies and things, and going out for coffees.”

Their lives only intertwined more when they were both offered jobs in supported employment at Aruma. Jenny has just celebrated 25 years working with us, a milestone that came shortly after her and Paul celebrated their 25th wedding anniversary. Jenny says it was Aruma focusing on their abilities that helped them reach these important milestones.

Asked what they’d be doing without any support, Paul describes a very unsatisfying existence. “It would be totally different, sitting at home, not doing anything, not meeting anybody.” Paul says part of what changed things for him was finding people who agreed with him that he could pursue his dreams, then give him help to do it.

Your gift will help us ensure that, like Paul and Jenny, people with a disability can follow their hearts and have a great future. Everyone has the right to feel good about themselves, and feel a sense of recognition and value throughout their life.

Your wonderful generosity will allow us to take positive action to make sure this is not out of their reach.

All fields are required
Processing