Zayla, 7, has completed her first year of mainstream school. Thanks to the support of House with No Steps (now Aruma) staff and her grandmother Belinda, her future is looking bright. 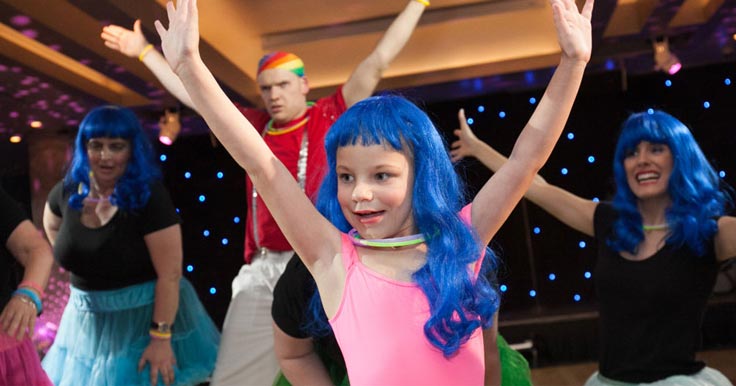 Zayla’s family was told that she was likely to spend the rest of her life dependent on the use of a wheelchair. “Zayla wasn’t using her left bodyline at all, and her speech was also clearly affected by her cerebral palsy. And yet, she was bright and courageous and I felt sure that with hard work she’d be able to achieve great things”, said Louise.

And achieve great things is exactly what Louise, Zayla and her grandmother, Belinda did together – with the help of a little bird named Coco. Coco is no ordinary bird, in fact she’s a sock glove cleverly made by Louise to help encourage her to begin using the left side of her body again.

Zayla wore Coco on her right hand forcing her to use her left hand during playtime and when she ate her lunch. To ensure she continued to use her left side also while at home, Louise taught Belinda some strategies she could use in daily life.

“I asked Belinda to rearrange the furniture in Zayla’s room so that most of it was on her left side. And when Belinda needed to get Zayla’s attention, again, I suggested she positioned herself on the left side so that she would need to turn her head in that direction”, said Louise.

Slowly but surely these strategies paid off and with a little extra help from a physiotherapist and speech therapist, Zayla’s transformation was incredible. When people passed Zayla in the street, who had not seen her for several months – they could scarcely believe she was the same girl.

Not only could Zayla now walk with ease, she could finally dance her little heart out which is something she’s always wanted to do.

But Louise and Belinda’s dreams for Zayla were much bigger than this. They wanted to transition Zayla from Little Learners Early Intervention to the local mainstream school.

To be able to achieve this it was vital Zayla had enough and the right kind of support. This meant Louise joining Zayla in the classroom as her therapist – a role that would continue for years to come.

“I spoke to Zayla’s teacher about her needs and how to meet them. We set aside an area near her desk where Zayla could sit comfortably and get her teachers attention easily. And we made sure that the layout of the furniture in the classroom was open enough to allow her to move about safely without bumping into anything”, said Louise.

This was all new to Zayla’s teachers but Louise reassured them that she would visit regularly and be on hand to answer any concerns they may have.

For Zayla, going to school with the rest of her peers was one of the happiest and most exciting days of her life thanks to the perseverance and support from both Louise and Belinda.

Louise and Zayla’s close relationship continues today and she still plays an active role in her life – visiting her every fortnight in the classroom – six years on from the day they first met at Little Learners.

When Zayla started getting behind in her reading and writing, Louise arranged to have a tablet computer installed in Zayla’s class, complete with special educational software designed to help her catch up. She also noticed that Zayla’s classmates were being a little too caring – helping to carry her backpack and support her as she climbed the stairs. Their intentions were incredibly kind but Louise knew they weren’t doing her any favours and were actually holding back Zayla’s progress. So Louise spoke to her teachers and this was then explained to the other students.

Zayla is now seven and has almost completed her first year of mainstream school.

Thanks to the support of staff like Louise and her grandmother Belinda, her future is looking so much brighter than it did all those years ago. Whether Zayla goes on to University, Tafe or somewhere else entirely, it will be because that’s what she chooses to do – not because she is forced to or not to by her disability.