Peta and Nat’s house of dreams

Peta and Nat are the first people with an intellectual disability to be approved for a home loan in their home town of Newcastle - a dream come true for the pair. 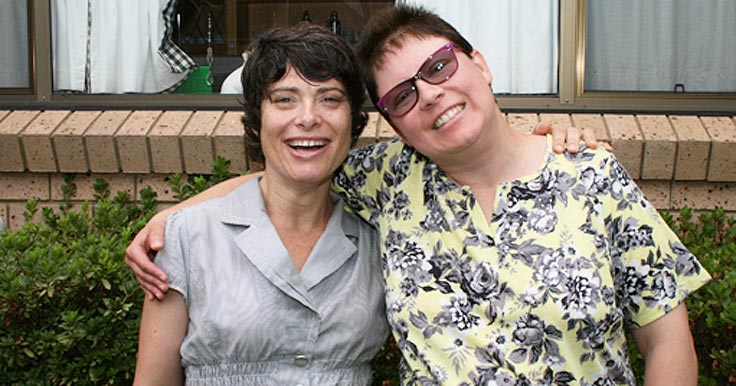 Our customers, Peta Lambert and Nat Howland have recently become the first people with an intellectual disability in Newcastle to have been approved for a home loan.

Their loan through Newcastle Permanent Building Society was settled on the 2nd December 2014 after more than a year of meeting and assessments to determine whether the ladies understood the effects and impact of a mortgage.

After living in the same apartment for the past three years, Peta and Nat are thrilled to finally be able to call their home their own. “It feels really, really great being a home owner. I had lived at home for 36 years before moving in here but I wanted more self control. I now make my own decisions and I have self control”, said Peta.

The lengthy process started in June 2013 when they first applied for the home loan. “We worked for some time gathering every piece of evidence we could to help build a strong case for the ladies. Knowing the girls had ongoing support was really helpful.

“The girls have two quite different learning styles so we had to think about that. House with No Steps (now Aruma) were really creative and innovative in making this learning digestible and enjoyable”, said Peta’s Mum, Laurel.

Peta and Nat love being home owners and can’t wipe the smiles off their face. They celebrated their recent success with a big housewarming party full of their families and friends.

“When we moved here I just fell in love with the place, this place means a lot to me and I’m so excited now that we’re home owners. It’s a wonderful achievement”, said Nat.

Peta and Nat have been a part of the Independent Living Skills Initiative (ILSI) for the last three years. The ILSI initiative enables people with a disability to move into more independent living arrangements in the community. Without the support of the ILSI program everything that followed would not have been possible. The ladies love their freedom so much that they will never move back home.

Laurel said, “All Peta ever wanted to do was to live an ordinary life. So now they’ve got a huge mortgage and they’re broke, but that’s ordinary. So they got what they wanted, an ordinary life.”