Trio officially housemates, and they couldn’t be happier!

Before getting their new place, Taylor, Ben and Eric struggled to find an affordable share flat with the right supports. 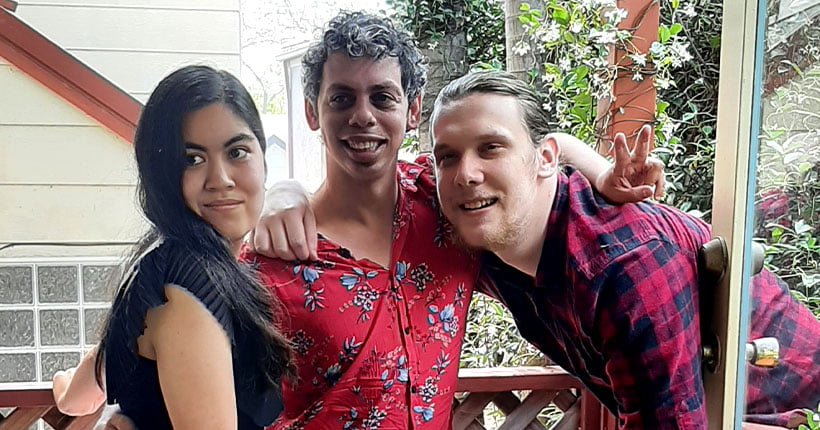 Before getting their new place, Taylor, Ben and Eric struggled to find an affordable share flat with the right supports.

Taylor wanted to get her own place with her friend, Ben, but didn’t have much luck finding affordable housing, so she reached out to Aruma.

Meanwhile, Eric wanted to live independently after leaving foster care, but the high cost of housing, no informal supports, and difficulty finding house mates were all major barriers.

The trio, who are all in their early 20s, met up via Zoom and decided to live together.

I knew straight away Eric was going to be the right person for us. He loves a lot of the same things we do, says Ben.

Taylor’s mum helped the trio search for an apartment, and after a couple of months, they found the perfect one!

The apartment is spacious and close to lots of different places. It’s in a really nice area and there’s lots of new places to discover, says Ben.

Wesley Mission helped Eric purchase some essentials for the apartment, such as a fridge, while our team at Aruma helped him work out a budget to pay his bond and other moving expenses.

A few months later, the trio moved into their new home in Rozelle NSW. Support workers come in most days to support the trio, and they are loving their new independence.

Taylor and Eric’s Support Coordinator, Anna, is proud of the collaboration and teamwork that went into making this happen.

The best part about this is how everyone’s worked really well together, and I can certainly congratulate Aruma for working collaboratively. We’ve put different organisations and people together with the same goal, and I think it’s worked really well. And it’s what these guys want.

Taylor, Ben, and Eric all agree that their friendship is the best thing about their new place.

Taylor and Ben are both very social people and they have introduced me to new people. With them I’ve start to gain new friends, says Eric.

We always have a really good laugh, says Ben.

Congratulations to our team at Aruma and everyone else involved in making this happen!