Shirley Oag has been awarded an Order of Australia medal for her outstanding community service to people with a disability for over 40 years. 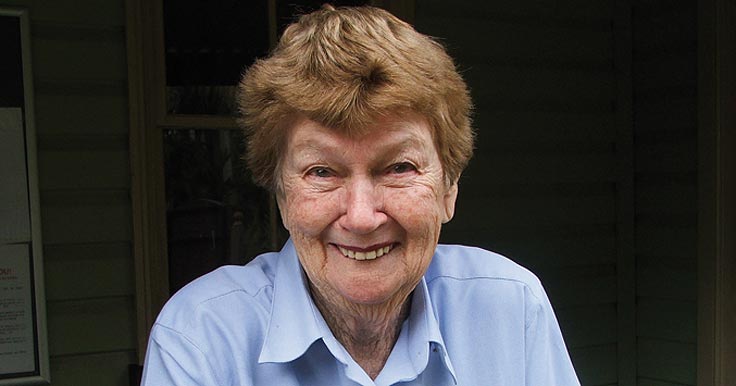 Former House with No Steps (now Aruma) employee, volunteer and pioneer, Shirley Oag has been awarded an Order of Australia medal for her outstanding community service to people with a disability for over 40 years.

In 1970 founder Lionel Watts held the very first meeting to establish a site in Alstonville New South Wales – what we know today as Summerland House Farm. Recognising the lack of any structured employment opportunities for people with a disability in the area, he had a vision for a working produce farm.

Shirley was one of the very first members of the working committee and provided many of the valuable contacts for this initial meeting, using her direct but persuasive charm to rally many in her social networks.

With no regular funding or income, fundraising was the top priority and so Shirley was appointed as the first Alstonville staff member, with the very important job of establishing fundraising, which included running local Art Unions, golf days and picnic race days.

Her role gradually evolved into Community Liaison Director, a position that she only retired from in 1990. Her 18 years in this role saw her travel far and wide raising funds for Lionel’s vision, much of which was through selling pens in crowded bars and other busy locations including Port Douglas, Port Pirie, Port Augusta, Mt Gambier and Broken Hill.

Entering a pub full of drinkers took some courage at times but she never shirked her task, knowing that what she was doing would ultimately benefit people with a disability. In one of her more unusual challenges in her fundraising travels, she even managed to chase down an inquisitive emu that had stolen her car keys near Bourke.

Between 1972 and 1990 Shirley was responsible for raising over $2M, an impressive figure by any standards. However this was not enough for Shirley to “hang her hat on” and she remained passionate about the purpose of our organisation and fundraising. Shirley moved straight into volunteering at Cawley’s Cottage, a retail gift ship at our Alstonville site dedicated to raising funds for local operations.

Shirley remained at the helm of Cawley’s Cottage for 22 years as its President coordinating the daily running of the shop. Open for all but two days a year, recruiting, training and supporting the shop volunteers is a significant task, along with the operational requirements.

Shirley would be the first to admit that she couldn’t have and hasn’t done it alone, but she has certainly been the driving force behind its success that has seen the shop grow from its original location in the farm homestead, to its present dedicated and subsequently expanded shop. Without this dedication and support from Shirley, Summerland House Farm would not have the same tourist appeal it has today.

Over the years Shirley has seen major growth, confronted many challenges and witnessed the transformation of an old dairy farm into the successful Summerland House Farm we see today. Her lifetime of contribution is greatly appreciated and recognised by all. Congratulations and thank you Shirley!