Players and club officials from the Edgeworth FC football club in the Hunter helped launch the new Arnett’s Program, offering kids with disability the opportunity to learn soccer. 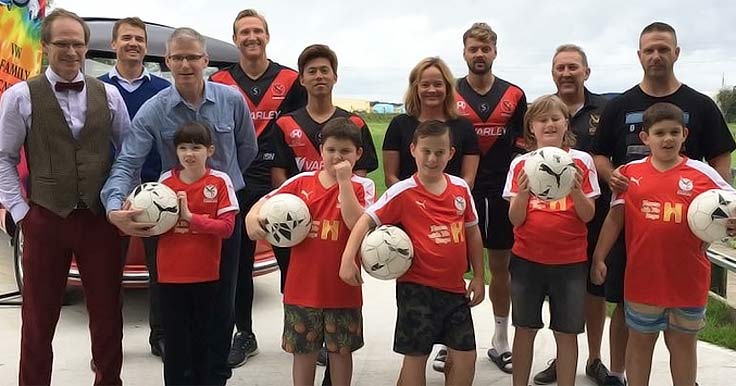 The Arnett’s Team gives kids with a disability aged from 7 to 13 the opportunity to learn soccer skills, in the same way that other children have. They’ve been starting to play in small-sided team games and developing talents they never knew they had.

Importantly, the program brings these children and players from the mainstream club into each other’s orbit – integrating them, along with their families, into a more inclusive community.

There have already been remarkable benefits for everyone involved, says Mark Midson – the organiser of the Arnett’s Program whose sons with autism, Bailey and Fletcher, are players.

“All the kids taking part are stronger, happier. Some wouldn’t even get out of the car at first. They’ve gone from not looking at each other to high-fiving and hugging and clapping each other when they score goals. It’s so rewarding to see. And their parents now have a social network. Some mums have told me that they hadn’t had a conversation with another mum in years. They’re talking to each other where they didn’t used to get out of the house because it was all too hard.”

The change that Mark has seen in his own children too has been immense. He tells us “to get my son Bailey to play a team sport was never on the table. When we first started, he’d see the field, think ‘beauty’ and bolt. To hold his interest was very, very difficult. But we’ve been building on all the kids’ abilities with training drills guided by coaches who include special needs teachers. Now Bai can look up, make eye contact with another child, kick the ball to them … this is huge for him.”

And it’s not just on the soccer field that positive changes have occurred, “he’s interacting more with other children, he’s not running away as much. He can go on school excursions where he couldn’t before.”

The Arnett’s Program is a wonderful opportunity for children with a disability to thrive and develop strengths they mightn’t have discovered otherwise. The positive results which have come out of this program show how social inclusion can go in a child’s life.

The hope now is for the Arnett’s Football Club to run for another season, and cater for twice as many children. As Mark says: “the kids have blown us away – what they can do is beyond my wildest imaginings.”