Peter is a top dad – down to earth, caring, and loves himself a bit of a dad joke, he also happens to have bipolar. This is his story.

Most fathers will say that becoming a dad is one of their proudest moments in life, and for Peter it was no different. Peter is a top dad – down to earth, caring, and loves himself a bit of a dad joke, he also happens to have bipolar. This is his story.

The day I found out that I was going to be a dad was a big wow. It was huge. I had sussed out that my partner, Roseanne, was pregnant but she hadn’t told me yet. When I asked her, she didn’t have to say yes because her face said everything!

The following Sunday I went to church, and there was a big sign up the back behind the pulpit which said ‘Jesus brings new life’. I walked in, saw the sign, and burst into tears. They were overwhelmed tears initially I think, because I didn’t know what the hell was going on with anything in my life at that stage.

So that was the initial wow, but after it had sunk in, it was a joy.

Ruby was a Christmas Eve baby. I think she decided to come then so her dad didn’t forget her birthday – you can’t forget that!

I remember it clearly, the day she was born. I had woken up at 3am in the morning and the phone rang – it was Rose saying, “Get your butt over here, it’s all happening”. And then it was panic stations!

So we’re at the hospital, and it comes around that Ruby is in the birthing canal, and the 2 people in the theatre turned to 10, which soon turned to 20 because the cord had wrapped around Ruby’s neck. When she came out she was blue as the ocean is, but when I heard Ruby cry I knew it was all good.

So there I was Christmas Eve morning with a new baby in my arms.

The first few months were pretty hard. Emotions were running wild, Roseanne and I didn’t know which direction we were going, and with a newborn it was even worse.

Three months after Ruby was born, Roseanne and I broke up. So that was a bit of a shock. But while I was committed to being a dad, the decision was made that Ruby wouldn’t be with me, and I struggled with that for years after.

I was now at this crucial point in my life where breaking up with Roseanne, Ruby being born, and all these other things had happened all at once. When I realised that the white picket fence dream was flying out the window, I had what you could call a mental breakdown and the bipolar set in.

It got to a point where I was so bad that my diagnosis was simple. A blessing in disguise I suppose. Otherwise, people would have been looking at me going – mate you’re off your nutter.

I was suicidal, I was moody, I was depressed, I wasn’t well for ages.

It was just a lot to go through all at once. I wasn’t seeing Ruby as much as I would have wanted which was hard. I reckon a lot of single dads out there are struggling really badly, and I had a mental illness as well for crying out loud, so I really struggled.

But I’ve come through all that and I’m a better person for it. Eventually I realised there is nothing worth doing yourself in over – and I mean nothing, no matter how hard you think it might be at a time.

Before I started medication it was scary at first having a young baby and a mental illness, but I had my mum and other people around for support – friends, family, the church. And since I started the medication and other treatment, I’m now stable – you can read more about that journey here.

When Ruby was a young kid, those were fun years. We used to go away together on fishing trips and I’d teach her how to do this and that. She had a ball at the time, but now she wouldn’t be seen dead fishing with Dad!

Now she’s a teenager, we have a very normal relationship you could say I suppose – up and down that is! She’s finished school now, and she’s got her own life which is what you’ve got to realise. Her life is not tagging along with Dad – her life is her life. It’s hard for me to get my head around. But I see myself in her, in her smile, just the way she’s thinking and stuff.

And what kind of dad am I? A hairy one! Nah, I’m a joking type of dad, I like a bit of a dad joke. Ruby hates them. I don’t take myself too seriously, I try to be a bit down to earth.

These days, my life’s under control because the bipolar’s under control. But there’s a reason they call it the black dog, because you never know when it’s going to bite ya. Ouch! But the best thing I can do is be good to myself, and make sure I am on the right track, so I can be there and be good for Ruby.

There are still moments in my life where bipolar sets in. Events can trigger it – major let downs, or major excitements. If I have a blow, it can trigger depression, and if something cool is happening, or if life’s really a breeze, I can be manic.

Because my disabilities are unseen, it’s not as if anyone can openly judge me. But there’s definitely still a stigma about people with disabilities having children out there. But everyone has a right to be themselves and have a life, and if it’s possible for them to conceive, and the support’s there, why not I think.

I’ve had emotions being a dad over the years – I’ve had plenty of emotions, and I’m still going to go through some more, the rain’s not over.

I loved Roseanne, I loved her dearly, and I love Ruby dearly. And my love for my daughter will always remain constant, but as she grows older it develops, it will never go away, it just develops. 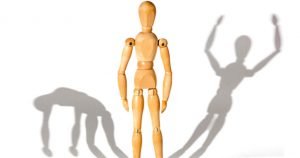