Mitchell just got his first tattoo - a red dragon! His mum, Robyn, tells us the story... 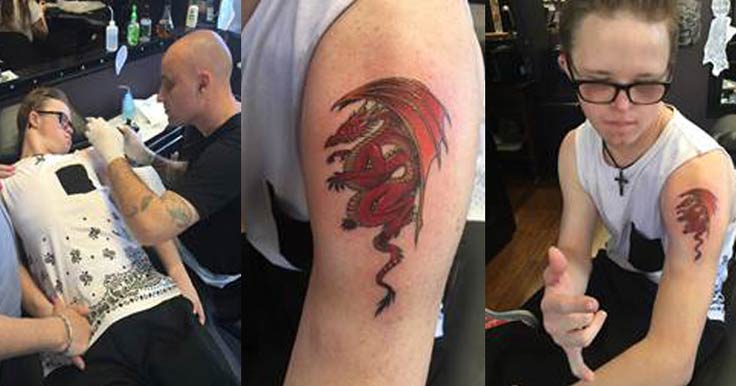 Mitchell is one of our customers from the Central Coast and he just got his first tattoo! His mum, Robyn, tells us the story…

For over two years, my 21yr old son Mitchell has been asking for a tattoo, but being his mum I didn’t think this was a good idea.

But one day, one of the support staff at Aruma, Ben, came to discuss it with me. At first I dismissed him as I had many others, but Mitchell knew what he wanted, and he and Ben had come up with an 8 step plan for getting the tattoo.

It was a great plan, however, I still had my concerns. What if he got half way through and changed his mind, what if he got scared and ended up with an ugly mark?

So Ben and Mitchell took me to talk to the tattooist about my concerns. The tattooist asked me “did you ask these same questions with your other son?” I did not. So I looked at Mitchell and asked if he was sure, and he said yes.

The booking was made and Mitchell wanted Ben to go with him “cause it’s a man thing.” The appointment took 4 hours and Mitchell did not complain once about the pain.

He now proudly displays his tattoo at every chance and wears a lot of singlets! He is so happy that he’s already designing his next tattoo.

Mitchell and Ben did this together and with respect for everyone concerned. This dream and goal would never have happened without the advocacy for Mitchell’s rights and the Active Support from the Aruma team.

Mitchell has achieved one of his dreams, and for that I am grateful to Ben for his perseverance in advocating for Mitchell’s rights.

Find out more about disability services at Aruma.

My story living with Prader-Willi syndrome